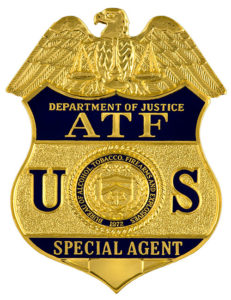 The ATF refers to the Bureau of Alcohol, Tobacco, Firearm, and Explosive. It is a federal agency operating under the US Department of Justice. The agency’s primary function is the control, transaction, ownership, and transport of guns, ammo, and bombs in interstate commerce. ATF’s scope also includes the inquiry and arrest of federal crimes concerning the illegal conduct, production, and ownership of guns and weapons, incendiary devices, bombings, and distribution of alcoholic and cigarette products.

What Does the ATF Investigate?

The ATF Investigates cases of gun trafficking and illegal manufacturing and thefts involving weapons, bomb-making materials, and other artilleries.  Another focus of its investigation is taxation of alcoholic beverages and tobacco due to the alarming smuggling and adverse physical effect these products may cause. The agency also looks into illicit black markets that traffic guns, alcohol, and cigarettes. It’s investigative authority also covers crimes that involve arsons and bombs.

What is the Authority of the ATF?

As a law enforcement agency, they are authorized to perform investigations involving illicit use of weapons, incendiary devices, alcohol, and tobacco. The ATF also has the authority to conduct investigations against suspected individuals; interview witnesses; acquire and execute search warrants to aid the collection of physical shreds of evidence. They can also confiscate illegal weapons and bombs. They are also permitted to take suspects of these crimes under detention, given that there is a warrant of arrest, or they are caught under surveillance. They have higher authority than local police when it involves crimes of their scope. This means that the power to take in the lead investigations procedures when they deem it necessary.

Bureau of Alcohol, Tobacco, Firearms and Explosives (ATF) special agents are the investigative arm of the its aw enforcement mission. Its special agents are trained at the ATF National Academy at the Federal Law Enforcement Training Center. Agents are educated in the investigation of federal laws relating to firearms, the criminal use of explosives, arson, the diversion of alcohol and tobacco, and related violent crimes.