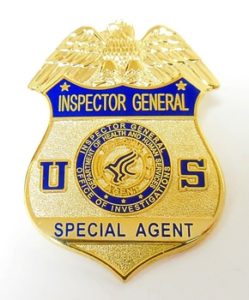 The U.S. Department of Health and Human Services (HHS) is a cabinet-level agency of the United States Government responsible for administering and regulating the U.S. Health Care System and its related programs. It is the parent agency of the (FDA) Food and Drug Administration and the (CDC) Centers for Disease Control, the National Institute of Health. The HHS Office of the Inspector General was established in 1976 and is the Federal Law Enforcement Arm of HHS and better known as the HHS OIG.

What Does the HHS OIG Investigate?

The Health and Human Services Inspector General’s primary mission is the protection and integrity of (HHS) the U.S. healthcare system as well as combating Health Care Fraud in HHS programs such as Medicare and Medicaid and the health and welfare of program beneficiaries. HHS conducts criminal, civil and administrative investigations of fraud and misconduct related to HHS programs, operations, and its beneficiaries.

What is the Authority of the HHS OIG

The HHS Office of the Inspector General maintains field offices across the U.S staffed with federal investigators are known as Special Agents to investigate fraud, waste, and abuse by Doctors, Nurses, Pharmacies, Insurance companies, and other healthcare-related professionals. HHS OIG Special Agents are authorized to carry firearms and make arrests.

Medicaid Fraud Control Units (MFCUs) investigate and assist in the prosecution of Medicaid provider fraud in US District Court as well as patient abuse or neglect in health care facilities and board and care facilities. MFCUs operate in 50 States.